Sheldon Martin, your self-defense and public safety instructor is a registered and accredited martial arts instructor,

I am a professional defensive tactics Instructor and have studied, self-defense, tactical edge knife defense, Shotokan Karate, Krav Maga, Taekwondo, and various other martial arts and continue to study martial arts as a lifelong commitment and journey.

My mission is to help build confidence, situational awareness, threat recognition, situational control, physical engagement and aftermath management courses that is to offer and to help provide those with the necessary skills to keep themselves safe.

New classes will teach all kids

Spring 2023 in May we will be holding a free self-defense class and also teaching child abduction awareness training for all children. Our program comes from many years of study and training to create this child safety class based on two very important principles.  Self-defense, but also Self-protection.

All children receive a free Safe Streets T-Shirt for attending, so be sure to provide your child's T-shirt size. You can submit your name and information by using our online form. Be sure to include your name, your T-shirt size, and your child's last name only that will be attending.

This 2-hour course is for children ages 5–12-year-old's and will be provided by Security Guard Training Services Inc.

Volunteers needed for this great cause, so any parents wishing to help assist or anyone else wanting to offer 2 hours of your time would be greatly appreciated.

We will need 8 Volunteers for this class. Please contact us in advance as we will be providing you with a free T-shirt for all the Volunteers and will need your size.

Bottled water will be provided free of charge for this event, please wear gym pants, runners, and short sleeve shirt or long sleeve. T-shirts will be handed out during the class for a group photo after class with permission from parents.

Certificates will be issued to all participants and volunteers that partake and we thank you for your support to help make this program a success for the children.

You can't always stop
bad things from happening,
but you can be prepared when they do!

Ladies Only Self-Defense & Self Protection Training

If you don’t know how to protect yourself, you are not safe. It’s plain and simple.

This class is for ladies only ages 14 and up.

their environment and deal with criminals and their intent.

"BE A HARD TARGET"

The fundamentals taught and techniques are easy to learn, and easy to remember.

Threat recognition is the foundation for employing effective self-defense measures to ensure your personal safety.

What does this initially entail?

In a word, awareness. Situational awareness is the bedrock of self-defense.

Without it, you stand little to no chance of proactively or reactively protecting yourself from danger, whether actual or potential.

Our instructor provides you with realistic training scenarios to provide you with the skill set and self-awareness training you will need to be prepared psychosocially if you need to react to a potential attacker. "BE A HARD TARGET"

Life can change in a split second.

Learn what you need to know about knife defense.

Discover proven techniques and tactics to optimize your chances of surviving a violent knife fight.

Acquire knowledge on your different options when faced against someone looking to stab you.

Instructed only to security officers for Self-Protection & Self-Defense

Knife attacks are brutal, there is no other way to put it nicely.

You need to learn to defend yourself against knife attacks before you actually get into such a dangerous situation.

Now, we're not saying it will ever happen, and we certainly don't wish this to anybody, but the reality is that anyone can be faced with a knife wielding attacker.

You could be walking peacefully on the street, and the next thing you know, you're faced with a drugged-up individual wielding a knife at you.

In this class you will learn trapping and disarming a knife attacker and fighting back.

We believe knife defense is one of the most important parts of self-defense.

It's a topic everyone should learn about at least once in their life.

A Knife Attacker Has the Ability to Change Your Life in Only A Few Seconds! 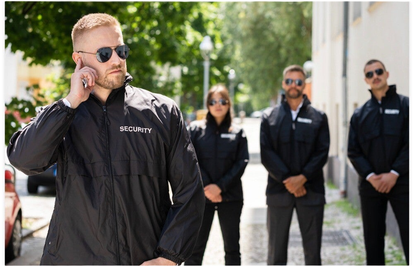 We Want YOU to Have
the Best Chance of Survival!

An Active Shooter is an individual actively engaged in killing or attempting to kill people in a confined and populated area; in most cases, active shooters use firearms and there is not pattern or method to their selection of victims.

Active shooter situations are unpredictable and evolve quickly.  Typically, the immediate deployment of law enforcement is required to stop the shooting and mitigate harm to victims.

The Active Shooter Response Training Course for security officers will help provide you with the tools to help you in the event you find yourself in this type of scenario.

You will be taught how to prepare yourself to use your security mindset, and fight through your fear with a survival mindset so you can evaluate your situation and react appropriately.

What is happening to Society

This is strictly a personal view and possible suggestions of what could be done by local government within the Province of British Columbia regarding the Rrivate Security Industry and the personal safety of Security Officers in British Columbia.

There is no denying something has to be done and it's gone on long enough and no changes have been made for on going training and development of Security Officers in British Columbia.

The job alone is no longer appealing due to the high risk of danger involved. From potentially being sprayed with bear spray, or being stabbed with a needle or knife.

Security Officers are stabbed in British Columbia by loiterers, shoplifters, or just an act of random violence.

Nothing is being done by many of the Security companies, no critical incident stress training, some no stab vests are supplied for the Security Officer and no on going training for edge weapon training. Why is this ?

Security Programs Division in Victoria needs government approval to implement changes and the Justice Institute of British Columbia also to implement new courses and training for Security Officers. Why is our local government not responding to the changing times and assaults and stabbings to security officers in British Columbia and providing them with more tools for there duty belt.

Restraints are almost obsolete but yet security officers spend over $1000 dollars to be certified to carry and use handcuffs and are told by there employer they are not allowed to use them ???? But yet the security license stated they are allowed to legally carry them???

How can they protect themselves if the training they take to become certified is taken away by there employer and turn places them at greater risk of personal injury???

Don't wait until it is too late and a security officer dies in British Columbia because they didn't have the tools necessary to save there life. You don't always have the option to disengage, so you need the training and tools to protect yourself and the life of another.

On going training is the solution! Question is when is it going to be implemented and when is the Private Security Industry going to take the initiative to provide the necessary training and support and equipment for security officers to be able to go to work safely.